A local perspective for NatGeo 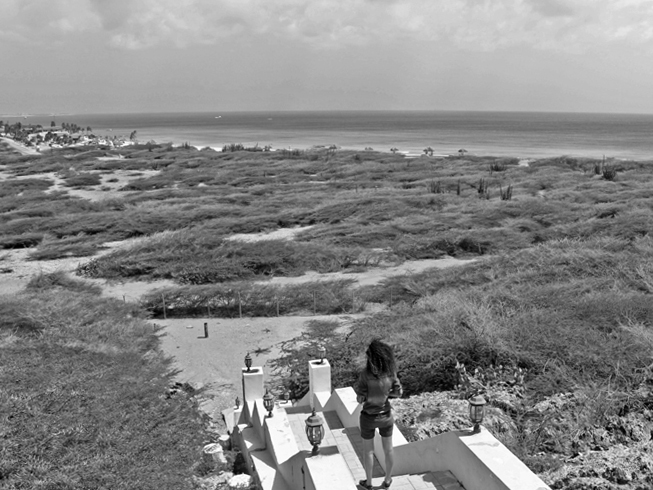 ORANJESTAD — Showing off my island t our visitors is among my favorite things to do. It is extra special when National Geographic is the one in the passenger's seat.

National Geographic's Digital Nomad mrs. Veerle Witte is in Aruba to explore all the happiness, culture and nature this small dot on the globe has to share. To get a local's perspective of the island, she asked three Arubans — featured in the 30 faces of Aruba project by renowned Dutch photographer Raymond Rutting — to share their top 3 spots. The perspectives will be featured on Veerle's blog: Travel Diaries as well as National Geographic's Traveler Magazine. I was excited to be chosen as one of the islanders to provide my view of my birthplace and spend an afternoon with Veerle.

I met up with Veerle, Paula Ochoa of the Aruba Tourism Authority and her intern Liza Jansen at our first stop: the California Lighthouse and Faro Blanco Restaurant. As we toured the area, I told Veerle that this location means a lot to me for various reasons. The restaurant has been part of my family for over 17 years as my mom is the director. The view from this Hudishibana hill is breathtaking and it never gets old. It reminds me of my visit to Niagra Falls in 2013. We stayed at a hotel where guests enjoy crazy views of the falls right from their bedrooms. Upon entering our room and encountering that sight, I asked the bellman whether it ever gets old, to which he uttered a simple "no." I understood what he meant as I too find myself just staring at the crystal blue water of the Arashi beach and Aruba's landscape despite having seen it countless of times. 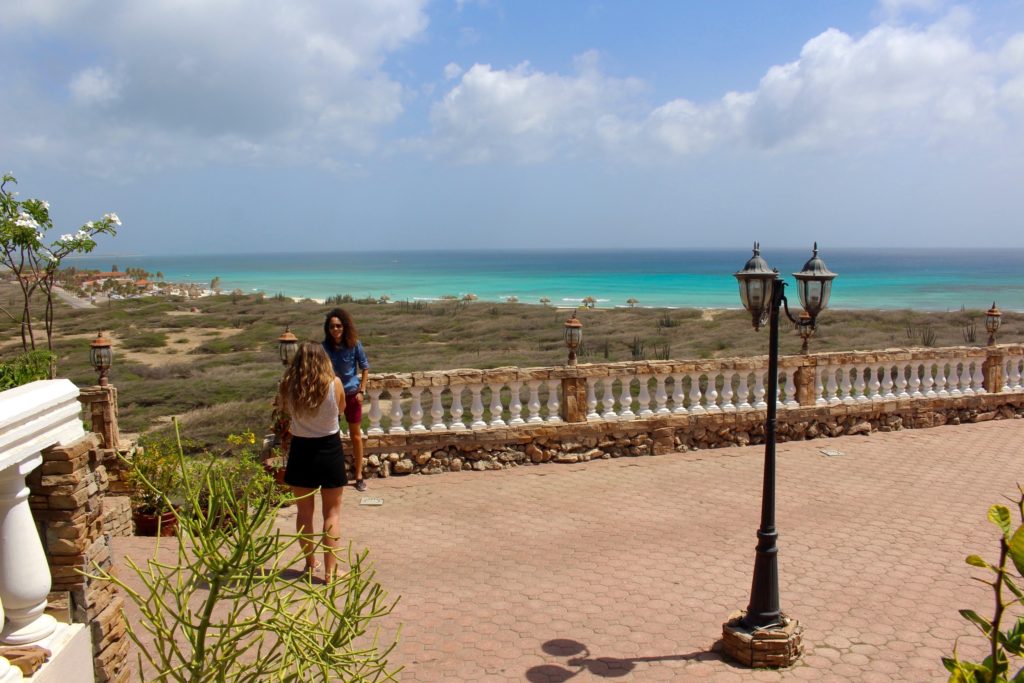 This place is also special to me because I have spent many new year's eves up here overlooking Aruba, the fireworks, expressing my gratitude for the past year and reigning in the new year. In that respect, this place symbolizes recurrent beginnings. In fact, before my family took over the restaurant they celebrated my baptism here. At that time, it was a smaller restaurant. Since then, we have expanded the venue with a larger upper terrace and a garden — which is often used for private functions such as weddings, birthdays and cocktail parties. 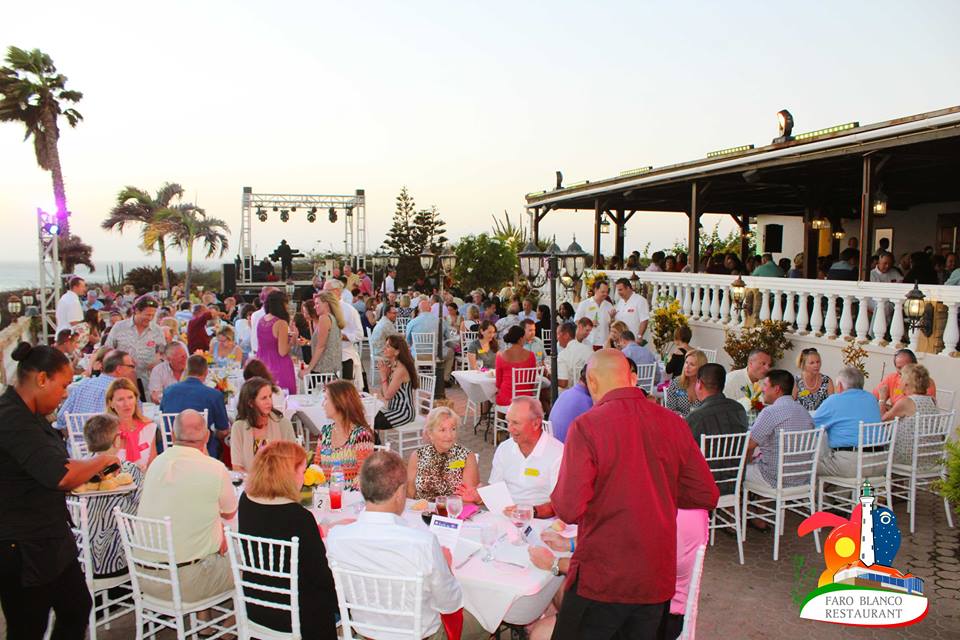 The restaurant was once the house of the lighthouse keepers. This year we are celebrating the 100-year existence of the California Lighthouse. It is currently undergoing a renovation executed by the MonumentFunds Aruba. Once completed in August of this year, visitors will, for the first time, be able to climb the lighthouse to experience a unique 360 view of Aruba. I wished it was already open so Veerle could climb up but told her that's one reason to return. 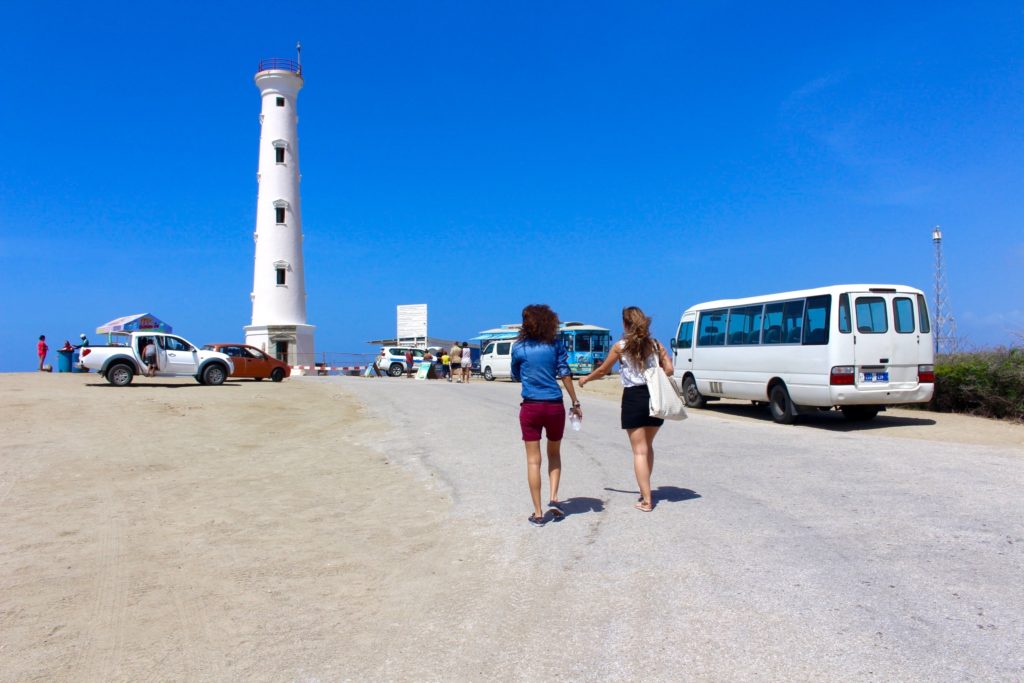 I hopped in the car with Veerle and Paula so we could continue conversing on the ride to the next spot. On our way we talked about the 4 languages spoken on the island (Papiamento, English, Spanish and Dutch) and the dynamics between them. We also talked about the educational system. I expressed my concerns about the majority of high school graduates migrating to the Netherlands to pursue a higher education where the success rate of islanders is low. As we engaged in deep conversation, we arrived at our next stop: a place of contemplation. The Alto Vista Chapel, Aruba's first Roman Catholic Church, is located on the hills above the north shore of the sea in the district of Noord. Veerle and I stood in front of the entrance where I explained the significance of this spot for me. 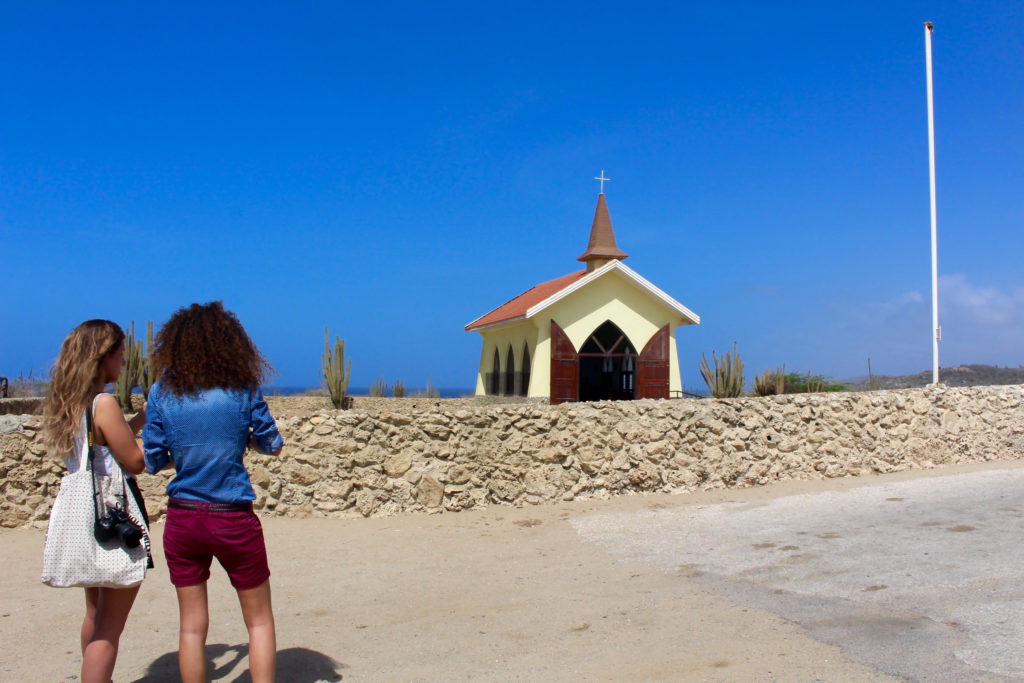 I was raised catholic but as a child I never liked going to Sunday mass. I found it boring and preferred to stay home and play video games with my brother. Every Sunday morning, my brother and I would pretend to be asleep hoping our parents would not wake us up and allow us to go to the late afternoon mass instead. If we succeeded, we would spend the rest of the day begging my mother to take us to Alto Vista instead of mass. At the chapel, no one speaks to you nor are you instructed to speak to anyone or anything. In other words, you are free to fill in your time as you please. So when sitting on the bench inside the chapel I would listen. The silence and strong energy I felt at this spot inspired me. What started out as a place where, as a child, I would play outside with my brother, became a meaningful sanctuary where I can find peace. To this day, I drive over whenever I feel overwhelmed. I remember recently, when my third book TITLE was being printed in Colombia, we experienced some adversity. I visited the chapel to meditate. I posted a picture of Alto Vista on my instagram account with the caption: 'For a peaceful delivery.'

Inside the chapel, Veerle noticed the numerous candles on each side of the altar. Locals and visitors either bring their own candle or buy one outside the chapel to light for a loved one, typically to pray for health. Back outside I took Veerle to the Peace Labyrinth located behind the chapel. The Peace Labyrinth is a walking meditation where your only task is to follow the path. The reason I love this meditation tool is because it is very compassionate to the human state. It is not easy to rid your mind of all thoughts and meditate, but engaging in some basic movements may help the process. By focusing on walking and making the turns, you may automatically fall into zero state. Another example of such a tool is a practice called Falun Dafa. The exercises help you fall into moving meditation. Veerle and I walked the Peace Labyrinth and met in the center where we spoke about surrendering and following blindly. 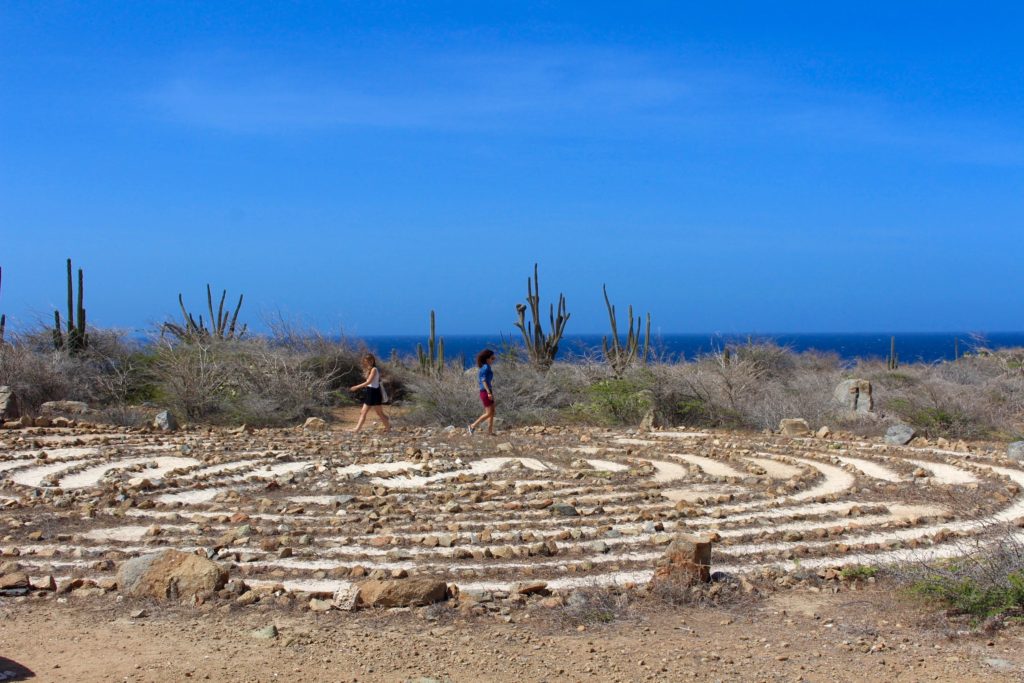 We left the district of Noord to head over to the district of Santa Cruz. People who originated from this town are often considered as the very traditional Arubans. My grandmother is a true 'Santa Crucero' and I wanted Veerle to meet her and experience this neighborhood. I also had a hidden agenda with this visit. On the island, I am a self-proclaimed champion of a board game called 'Mens erger je niet.' After I posted a couple of photos of my victories on social media, I began receiving challenges from strangers and requests to participate in national competitions. As my grandmother taught me how to never lose at this game, I figured it would be nice to play a game with Veerle. Those who are familiar with 'Mens erger je niet' know how long one game can last. Since Veerle had a tight schedule and many more places to visit, we played until one of us got our first pawn home. Veerle took that victory but the game remained incomplete. As I thanked Veerle and wished her farewell, I reminded her of two reasons to return to the island: climb the California Lighthouse and try her luck at defeating the master and her prodigy. 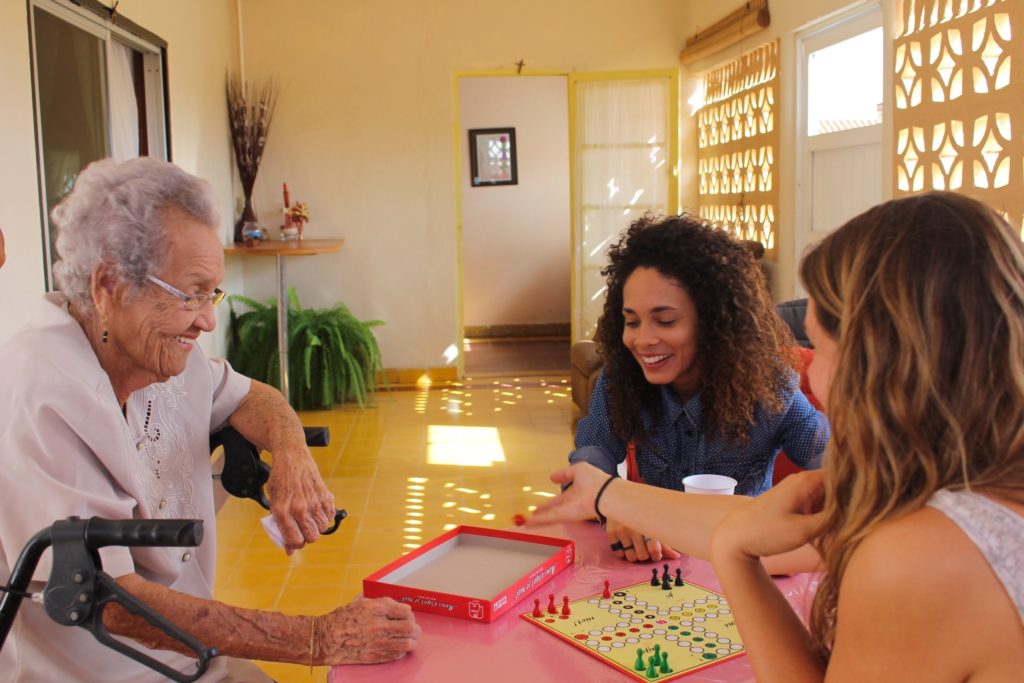 Special thanks to the Aruba Tourism Authority, Paula Ochoa and Liza Jansen for a wonderful afternoon. Huge gratitude goes out to National Geographic's Veerle Witte, I can't wait for your blog and the magazine feature! 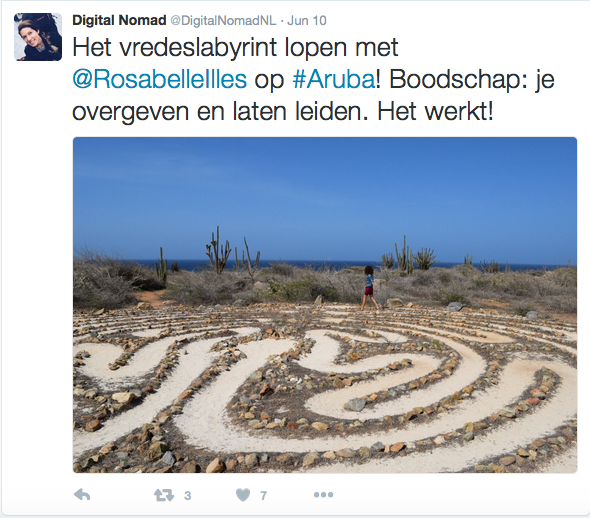