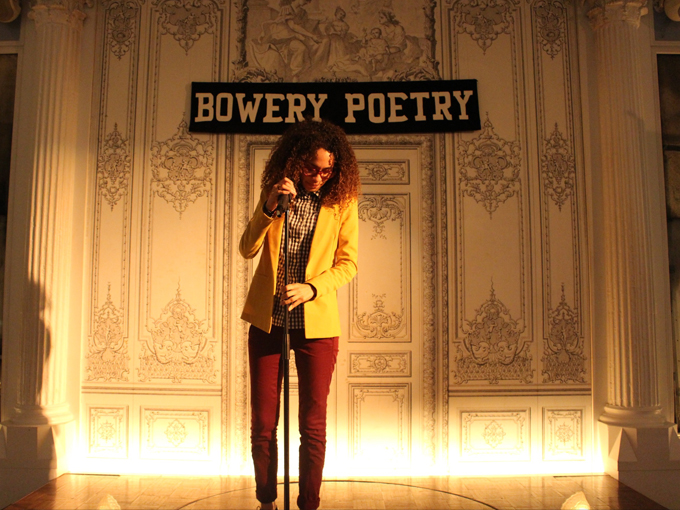 BROOKLYN, New York — Reflecting on the city, the neighborhoods, the people and the poetry of Brooklyn and Manhattan.

A few months ago I received an Instagram message from Leon Labastide, a New-York based poet from Guyana. We had been following each other on social media for some time but besides the 'double taps' and comments on pictures and videos, we never spoke. Leon has 3 books ‘Breath of Life Poetry’ (2010), ‘Here Comes the Dreamers: The Journey’ (2012) and ‘Transparency’ (2013). When he reached out to me, he expressed his interest in collaborating on a poetry tour. He said the tour would have stops in Brooklyn, Aruba and Curaçao. For this reason, he wanted one poet from Aruba and one poet from Curaçao to join, where each poet would organize the events in his or her respective countries. I immediately expressed my enthusiasm to be part of this awesome project. I admired his work and I was eager to perform for the first time in New York. After a couple of calls back and forth, solidifying the plans, we set the dates of the first stop of the Trilogy Tour: 2-7 June, 2016 in Brooklyn, New York.

I arrived at JFK airport at 7pm, about an hour late as my flight had a delay. I was embraced by Leon at arrivals and we rushed over to my hotel to get ready for the first event on our itinerary: an open-mic night in Brownsville. In the car, I told him how excited I was about being in New York again. We spoke about the coming days, the plans for the rest of the tour and life as a writer. At a certain point he asked me if I was nervous about performing, to which I looked over at him and said "Of course I am nervous!" After he laughed I asked him if he realized that both games 1 and games 2 of the NBA Finals were scheduled on nights that we have events. We were both Cleveland Cavaliers fans which was a relief. The rest of the ride was dedicated to predicting the results of the Cavs vs. Golden State Warriors match up. As soon as we arrived, I checked in and rushed upstairs to get ready for the open mic night. Leon waited for me at a gym across the street where game 1 was on.

Radiant Shade Open Mic Night
Back in the car he explained the history of the neighborhood we were headed to. Brownsville is known as a rather rough area recovering from a tough past, where poverty and crime still remain relatively high. It reminded me of a neighborhood in Orlando where I held a poetry workshop last year. I was curious to see how art was expressed in this community. As we parked outside the facility where the Radiant Shade Open Mic Night is held, I could already hear and feel the energy. The organizer and host R.Q. Tek was celebrating his birthday. Poets, singers, musicians, rappers and comedians all took the stage. The topics explored ranged from love, religion, discrimination, life and how mundane work can be.

"And next we have a poet who came all the way from Aruba to perform tonight. Did you just get off the airplane and head over here?", R.Q. Tek asked me.

"I showered first", I yelled out at him.

"See now that's dedication can we have a round of applause for Rosabelle." 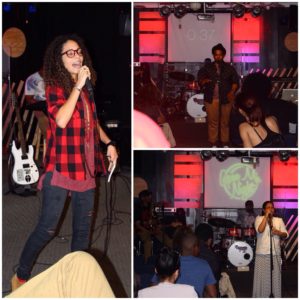 I got up, wished R.Q. Tek a happy birthday and explained very briefly who I am and introduced the poem I was going to recite. I specifically wanted to recite a poem that includes both English and Papiamento. Inspired by Curaçaoan singer Izaline Calister—who performs in Papiamentu all over the world and still reaches her audience—I wanted to see what would happen if I included Papiamento in an international performance. I was surprised to receive a standing ovation after I finished reciting 'Amor a bisa / Love said.' When I walked to the back, a Spanish speaking visitor told me he understood what I was saying and the dialect is awesome. Because the show continued and I didn't want to disturb the next performer by talking, I didn't get a chance to tell the visitor that Papiamento is an official language and no longer a dialect. I was so pleased with the confirmation that I could recite in Papiamento while performing abroad. I received this same validation when I performed in Bogota, Colombia last month. As the night came to an end at about 11:30PM, Leon and I took a last peek on his cellphone to check the score. It was a victorious night on stage in Brownsville but the Golden State Warriors took game 1 in Oakland. We consoled each other and drove back to the hotel.

The next days were pretty relaxing as most of our activities were scheduled at night. I had been so busy during the last months that the down time felt strange—and necessary. It was still spring in New York, it rained a little bit and at night it was a bit chilly for this Caribbean child. I walked around the city, did some reading and spent time with Leon. On a beautiful sunny afternoon we did a photoshoot to gather promotional material for when the tour stops in Aruba. We took the Guyanese and Aruban flags around the Brooklyn Bridge area where Leon's brother captured the shots. 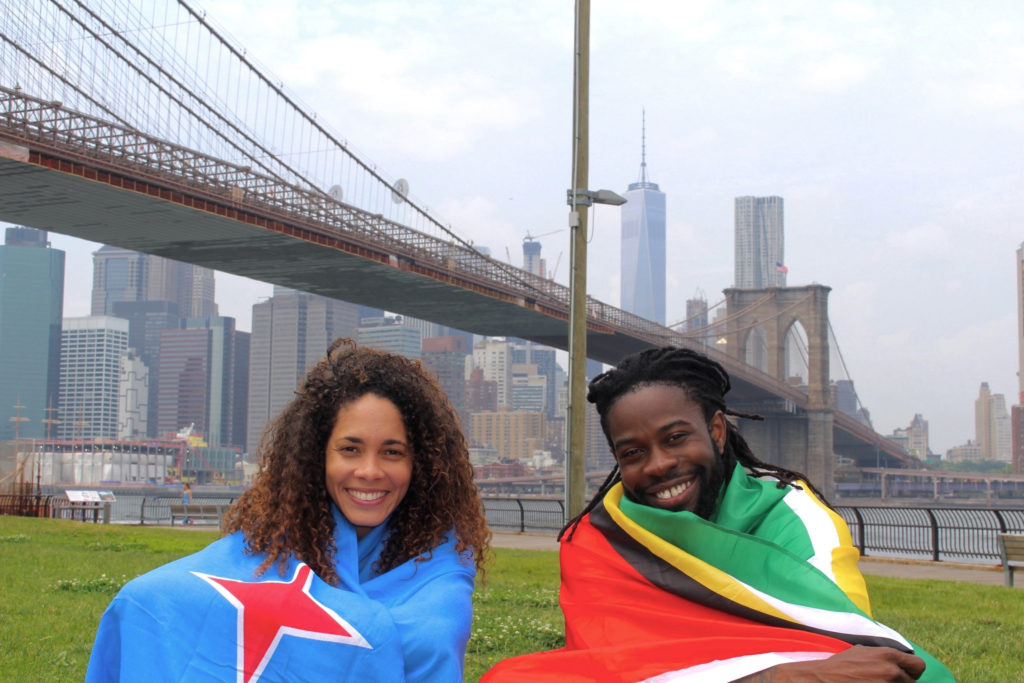 Trilogy Tour Poetry Night
The main event of the Trilogy Tour was held on the 5th of June at South Oxford's Space in Fort Greene. Our host Steven 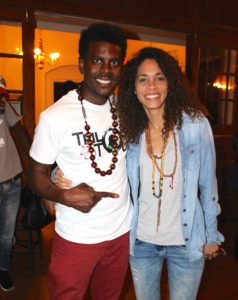 Strickland, a talented actor and director, entertained the audience and introduced each poet. The topics explored by the artists on this night ranged from religion, discrimination, race, relationships and suicide. I admired how honest and vulnerable the poets were—in the same breath I might also say how strong they were. Each poet received 5 minutes to perform. I was inspired by was blown away by a poet who goes by the name of 13th midnight (Tarishi Shuler). Throughout his career, he has won many poetry slams across the United States and in 2012 he opened for former US President Bill Clinton at the Madison Ballroom in Time Square. His energy and the power of his voice impressed me severely. In the last round, all poets joined in what Leon called a popcorn session: all poets recited a short poem, one after another and from where ever they were standing or sitting. It felt a bit like a flashmob of poetry. The night was beautifully organized by Life of Wisdom foundation with the help of many volunteers including Leon's mother and grandmother. Having family as the force behind your projects is something I am well familiar with.

Bowery Poetry Club
The next day we headed over to Manhattan for our last performance. The Bowery Poetry Club hosted an open mic night as part of the Beat & Beyond festival that was taking place from the 3rd of June to the 8th of June, 2016. Beat & Beyond is a 6-day celebration honoring the poets, musicians, bookstores, publishers and other significant individuals whose voices and energy transformed the U.S. forever1. After the second world war, the Beat generation were active as a group of authors who challenged traditional narrative values, questioned the political system and rejected materialism. They explored spirituality, delved into Eastern religions and Buddhism and practiced meditation. I had been wanting to perform on this stage for quite some time now for precisely this reason—their respect for literature and the activities they organize. At the open mic night, one artist who had the privilege of knowing Allen Ginsberg—one of the leading figures of the Beat generation—presented an unpublished poem given to her by Ginsberg. To sit and listen to people who were in direct contact with a generation that influenced literature so enormously was a unique experience. Leon recited a soothing poem entitled "Coffee & Trust issues." It was so nice to see a variety in his performances throughout the 3 events, from energetic pieces to calm pieces. 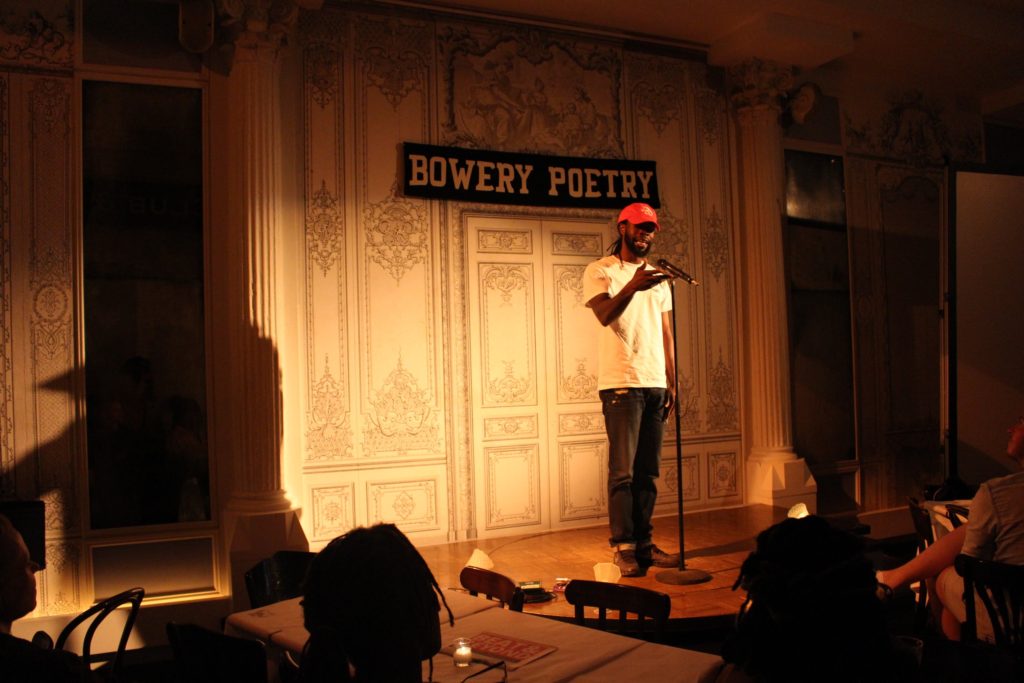 Trilogy Tour in Aruba
As I write this blog reflecting on my time in New York, I am also looking forward and thinking about cool stuff we can do when the Trilogy Tour continues in Aruba. It will be my turn to host Leon on my island and I am excited to introduce him and his wonderful work to the folks here. The first stop of the Trilogy tour was a success and—like any event—there are special people involved who make it all happen. I would like to thank Prins Bernhard Cultuurfonds Caribish gebied for sponsoring my participation in the Trilogy Tour. My gratitude also goes out to Leon, his manager, his entire family and all the organizers for taking such good care of me this past week. Leon, see you in Aruba! 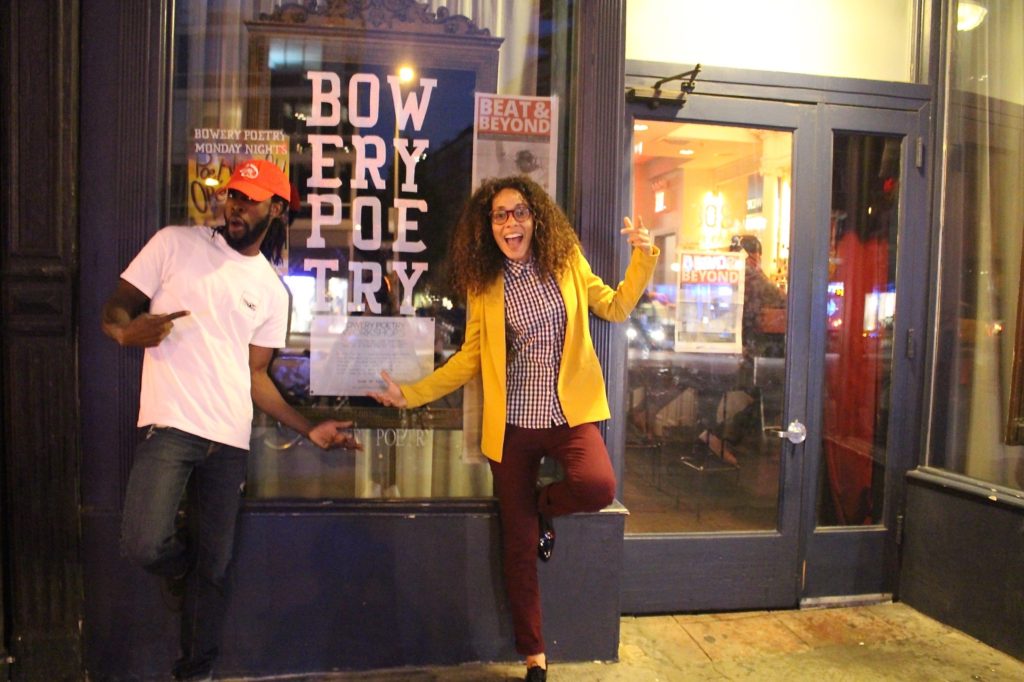